I guess is pointless to speak about who wonderful voice and amazing tunes you can find in warda's songs.
I choose this song cause when got to hear it first time, I didn't found it as nice as others, I didn't have feelings for the song itself, and it didn't provoke me any sort of special move in the melody.
This totally change after I came to know the lyrics and the profound meaning of them.
Thanks to a dear friend, now I can enjoy this song like never before and wanna share it with you!!
Here it goes, enjoy!

If there's no blame in the air
I will spread my wings and fly.
I will scape from the world and stop this bad life.
Stop blaming me, Imagine how will be the life without been afraid of the blame.

They asked me many times about you:-¿Do you love him?- (She answers) Yes, yes,yes
Why I have to denied?

Always traveling, always moving from one contract to another, but always on gulf countries, this is my first contact with Tunis and it's amazing culture...although their past is so extense  as the old port of Carthage and even more vestiges of a civilization destroyed by the powerful Rome.I wanna base this post on something much more simple; the daily living on the streets of Tunis, and something even simplier the amazing doors that makes from cities like Sidi Bou Said ( which means: The gentlenman who...) a "must" attraction for tourists.

Searching information here and there I found out that the so traditional blue color on the doors, is not so old as the yellow, green,white or red.
Each color represents a dynasty that pass through Tunis and leave their stamp on the country.

White doors: Is the color of the Hafsid army (1228-1574), Aghlabids
Green doors: From the Fatimids, is believed the green represent the color of the paradise
Red: Sanhajids
Yellow: In the Holy muslim book, the occre yellow is the predilect color by Allah (Or so I found) 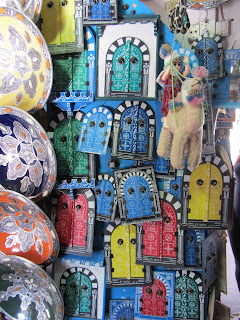 There's another type of doors which have another small door on it's down right side, this small door is named: Khoukha, and was invented by the spanish princess whom was wife of Abdul Aziz Ibn Mousa Ibn Noussair (Governor of Andalucía and Africa), this small door was created so their muslim subjects bow infront of his monarch. 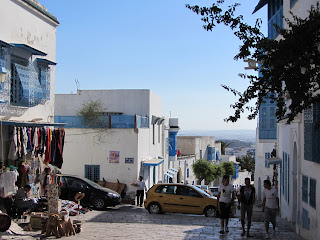 The blue color is a tunisian symbol of good luck and prosperity.... but it wasn't so popular until 1920 when Baron Rodolphe d' Erlanger a musicologist born in Paris but totally in love with arabian culture and it's music, made a law in Sidi Bou Said city ordering to all it's habitants to paint their houses white and doors,windows and smithy in blue. 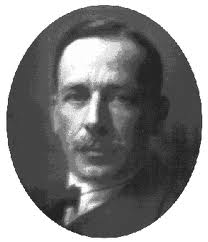 Baron Rodolphe d' Erlanger was a french painter and as I said before musicologist, he specialized in arabian music.He study in Paris and London and wrote 6 vol. of a work called: "La musique arabe" (1930).In 1932 he help to organize the "congress of arabic music in Cairo", this idea was suggested to the king Fuad I from Egypt,and  even he was so ill, he manage to send a tunisian ensamble to the congress,. He passed away shortly after.
His palace is in Sidi Bou Said "Nejma Ezzohara" is the name of the house, nowadays is the
"Centre des musiques arabes et méditerranéennes"

He helps a musical genre called "Ma'luf" originative from Lybian, Algeria and tunis to revive by the 1920's ....

You speak spanish?... you then may wanna check out his outstanding work on this link: